We got to celebrate our 1 year dating anniversary! Well, it was the anniversary of our 2nd first date. Why second, you ask? In my first entry in this series, I mentioned that Matt and I had gone out on a blind date about 6 years ago, by our reckoning. We can’t really remember much about it, except that it was at Red Lobster and it went alright, but neither of us really felt like going out again. We were young, I was silly (still am…but that’s another story), and we both had very different priorities. With 5 additional years, we had learned a lot. I got to travel abroad and meet all sorts of people, learn some valuable lessons, and came home again.

So, we had been friends on Facebook for all that time, observing each other from afar, and started talking again last November. We decided to have a second go and went out again on December 2nd, 2011 to the Middletown First Friday arts festival. It was really fun and we had a pretty good time together. Enough to decide we’d keep seeing each other.

Ok, so I guess our REAL dating anniversary won’t be until January 13th, but I personally have never had an anniversary, besides my birthday (which I’m a big fan of…have I mentioned that?) to celebrate. And Matt and I both had two $25 gift cards to The Cheesecake Factory to burn. It’s been a few years since I’ve gone, but I love cheesecake…so much. So much so that I’ve told my family, close friends, and coworkers…even random strangers…for years that if they ever found out who was going to propose to me, to make sure he knew to include cheesecake. The ring didn’t have to be in the cheesecake, it just had to be there. Thanks to all my family, close friends and coworkers who failed me by not telling him about that important detail. You will be recompensed  accordingly. (giggles….potentially, devious giggle) Once he found out about that, he made sure we got some cheesecake before we came back from Alabama. It helps that Matt likes cheesecake too.

Anyway, on Saturday, we planned to head up to The Cheesecake Factory in The Greene in Beavercreek. That place is so beautiful this time of year. Also, have you ever noticed that the way The Cheesecake Factory looks in real life is totally different from its portrayal in Big Bang Theory? They are totally off. Our waiter’s name was Jeff and he was pretty fun. Very informative on the menu. I think he must have been working there for a very long time because he even knew when they carried my favorite cheesecake, the Toblerone. That was pretty amazing. They don’t have it anymore so I had to settle for the Dulce de Leche cheesecake, which was pretty fab. Matt had Adam’s Peanut Butter something or other. He really enjoyed that. That guy is a sucker for chocolate and peanut butter. Waiter Jeff popped over quite a few times and whenever Matt asked him something, he would answer pretty quick, followed by the sound, “Maaa-.” We couldn’t tell if he was saying “Man” or “Ma’am” so we decided he just omits the last consonant so that he could say the same thing to men and women.

We spent the rest of the evening watching the movie Prancer. Do you have a favorite Christmas movie? Prancer is at the top of my list. In fact, I bought that copy just so we could have it at The House. I’m hoping that Santa will bring me some more this year. Can’t wait! Matt was laughing at the movie because the little girl in Prancer is just about completely me. Except I wouldn’t be as much use cleaning that big room as she was. Maybe, if I had to do it to raise money for reindeer food.  My other favorite Christmas movies are Scrooge, with Albert Finney, The Bishop’s Wife, It’s a Wonderful Life, and White Christmas…among others.

So, besides favorite Christmas movies, do you have a favorite order for The Cheesecake Factory? 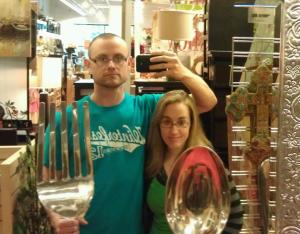 I’m getting married to my, you guessed it, best friend on June 1st, 2013! Matt and I are super-excited and since we have quite a bit of time to plan this thing, I decided it’d be fun to blog about it. Well, maybe not always fun, but at least informative and it might give me a welcome distraction. You can find all the posts by clicking the “Getting Married” tab on the right of this page, or by clicking here. Thanks for stopping by!