Last weekend, the Huz and I took off for Western PA to enjoy some time with my grandma. The nickname, Grambo, was lovingly put into use by some of my cousins (she could do anything!), who have since dropped the usage. However, I have continued to refer to her as Grambo to this day and therefore she will be known as Grambo for the rest of this entry.

I have been going to Western PA for visits all my life. For most of said life I’ve lived in southwestern Ohio, so the trip is familiar and as comfortable as putting on pj bottoms when you get home from work.

So when we hopped in the car and it had already been raining, I decided it would be best for me to drive this regular route. On the Ohio side, the roads are great. We usually take 71 up to Columbus and shoot around the loop to catch 70 over through Wheeling. Once you get on the other side of Wheeling, though, the roads take a turn for the…well…for the Pennsylvania.

But let’s go back a few miles. We were somewhere between Columbus and Cambridge when I suddenly realized that I had left my jeans back at The House. We were halfway through our trek and couldn’t turn around now, so we began looking for the nearest Old Navy on our way. Yes, we were going to stop for some jeans. I can’t spend an entire weekend in my work khakis. Yuck!

We’ve always driven passed the Cabela’s exit so I had no idea what was up there. Wonderfully, there was an Old Navy, an Applebees, and had I lost my will-power, a Bath and Body Works. I stayed strong though and we continued on our way.

Pennsylvania roads are some of my favorites. They are wildly unpredictable in the twists and turns and the construction patterns. Also, the on and off ramps are crrrrazy short. The Huz was not amused by them in the least. Once we got there, all was well and we enjoyed the weekend of going to church, having lunch with Grambo and Uncle Bull at the new Chinese buffet (sadly, Super Panda is no longer in service), pizza for dinner and then a leisurely Monday morning before we had to start our trip back. 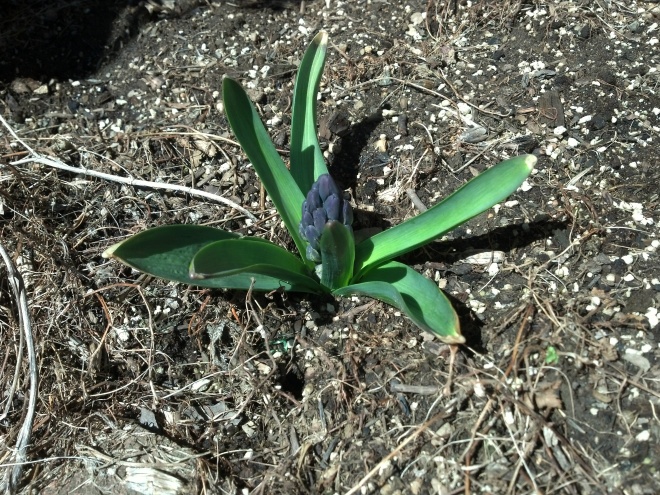 Flowers coming up in Grambo’s garden!

I asked Grambo if she had a hairdryer and this is what she gave me. I’m pretty sure that my mother used it when she still lived at home. 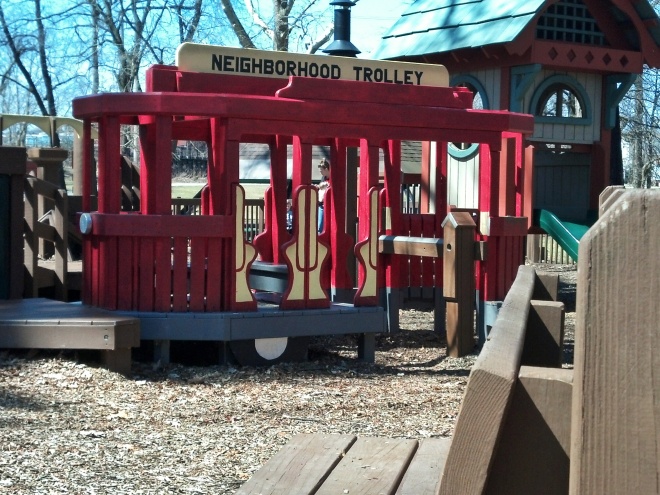 Always have to stop by Mister Roger’s Park when in town.

This morning I went back to visit the church I was attending before I got married and moved out of the area. There was a special baptism service for 11 people! Yeah! It was beautiful! A couple of them were kids that I had worked with in the children’s programs – very special to me. A few others were dear friends or the kids of dear friends. It was such a great service and after a whole winter of failed attempts to get back for a visit, it was much needed to see those faces that were such a big part of my life for so long.  I’m so glad that I don’t live TOO far away for the occasional visit.

Baptism is such a beautiful event. I was all teary-eyed while it was going on. I love watching people take that step of obedience and the picture of salvation it is – identifying fully with Jesus in his death, burial, and resurrection.

Our crocuses are in full bloom!!!!  They are gorgeous! And a couple days ago, I saw a little fleck of yellow behind them and the mini-daffies are blooming now too. I’m just decided that they are mini’s because they are so much shorter than any other daffodils I’ve ever seen…it is better to say that they were meant to be that way and living up to their full potential than say that they are sorely understated.

The mini-daffodils. No joke, I’m pretty sure the crocuses are taller than these babies.

Crocuses are just about my favorite spring flower…they are the first to bloom and remind me that Winter never lasts forever.

Yep, I rock a pink flamingo in my garden thanks to my nieces and nephew…it’s the only pink I’m willing to have. And there is a mate for it. 😀

I bought an axe a few weeks ago in preparation of trying to dig/whack out some stumps and roots from the garden beds. The Huz keeps telling me that it’s not long enough to be an axe, but I told him it’s all about proportions – it’s smaller because I’m smaller. Yeah!

I also bought some summer bulbs to add to the perennials I already have going. Last year, there ended up a crazy amount of pink and purple…it was too much. This year, I’m going for more…or less rather…or more…or something. I don’t really have a plan for the garden bed…plus I have these awful stumps that are strewn through the beds. They make me so frustrated that I want to just toss a bunch of seeds on the dirt and be done with it.

I did manage to pull myself together a bit to pull out one of the boxwoods and replace it with a forsythia. I might regret saying this in a few years, but I have no problem with it going all wild and crazy where I plopped it. At least that way, it will cover the stump that’s right in front of it.

You have no idea… 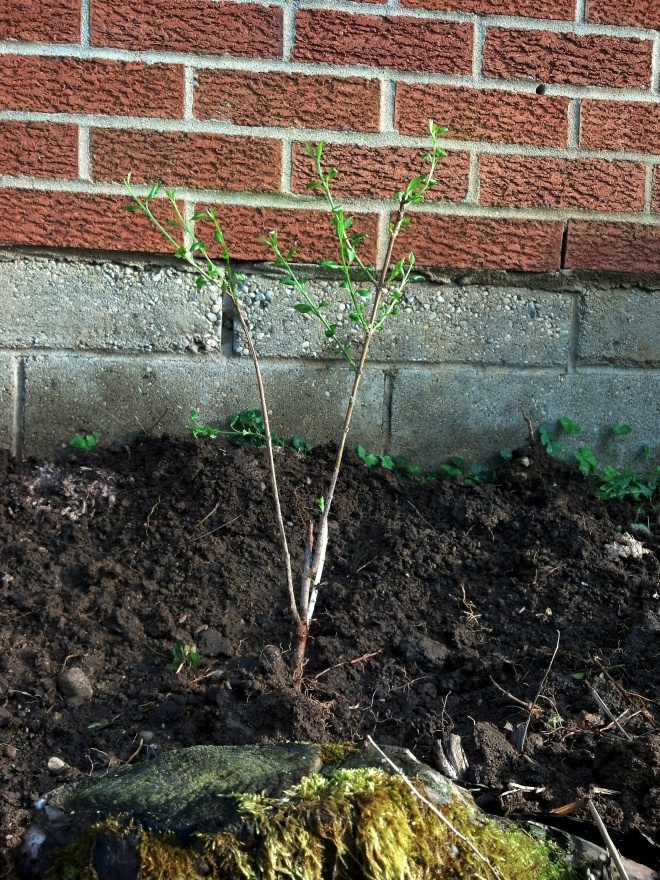 Such a pretty little forsythia…so much potential, such a bright future!

The boxwood that lost…