Today, it rained for the first time in a week or so, and it’s been so hot, that I welcomed it.  Walking in the somewhat cooler morning, watching dragonflies dart and flit all around me, it started to sprinkle.  And then, it was a steady shower of rain.  I have begun carrying my umbrella with me at all times, not just because of the rain, but for sun protection as well.  I quickly pulled it out and was sheltered for the rest of my walk.  After a few moments, when the newness of the rain had just worn off, it hit me.  A sweet fragrance snuck into my nose and it was new all over again.  It’s like the ground itself sighs, and the sweetness from the roots of all the flowers and plants comes bursting out and dances with the drops of rain.  Before too long, the rain lost its intensity and then became but a memory.  But the smell was still fresh and aromatic…compounded by the melody of some pigeons surrounding a haphazardly-formed puddle…it was a special morning; as gentle and precious as God reaching down and holding my hand while we took a stroll.  Soon afterwards, the clouds split apart and were followed by the deep blue sky. 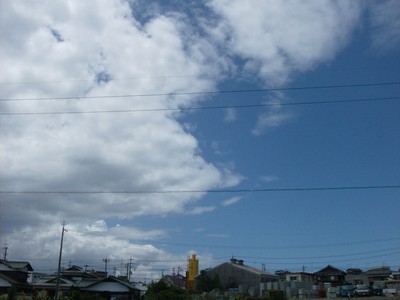 Sometimes I’m blown away by the facets of living in a foreign country where the people look so different from you.  Sometimes it’s annoying, others endearing…and others just, interesting.  Recently, I’ve been interested in how friendly people become, simply because I’m a foreignor…a blonde gaijin.  I had dinner at a Korean restaurant last night with Mika-chan, and as we were waiting to be seated, people would walk in the door, or out the door…but they would always stop and bow a little, or smile, or say hello to me, before going on their way.  A few times, Mika said, “Do you know them?”  I just say nope…they are a new friend.  She’d laugh and we’d go on with our conversation, only to be interrupted by another nod and “konbanwa”.  She’s starting to ignore it almost as much as I do.  Even as we sat down, we were laughing about something…and our table was Japanese-style, where you sit on the ground, and the table is low.  We had our own little room, separated from other parties by a sliding paper wall divider.  I leaned back in my exhaustion from laughing, glanced to my right and saw the party next to us staring at me…grinning ear to ear.  Next thing we know, a child pokes her head from the other side, just to get a glimpse of the gaijin.  Apparently she didn’t get a good enough look because she disappeared and ended up on my side.  As soon as I smile wave her, she ducks away and hides from me.  Such is life…we finished our dinner.  It was oishii!!!

I’m getting in with my Quixote restaurant people.  Yesterday I had lunch there and they were in really good spirits.  There were three other customers in there already…one being Shirayama-san and the Too-Tired-Teacher-Who-Used-To-Be-In-Yakuza, and the last being a gentleman who I have seen before but have never really been introduced to, so I can never remember his name…his English is better than the owners though.  Mr. Too-Tired-Teacher was sitting in my usual seat, and he knew it, so he invited me to sit opposite of him.  As soon as I accepted, he began quizzing me on my Japanese and telling me new words.  I couldn’t write, order, and catch-up with my friends fast enough.  But he finally calmed down.  At last, Mitsui-san was free to talk with me, and he has begun to treat me a lot like a dad.  He put my food down and said, “Please eat all of it.”  🙂  But it was with an authoritative voice and he stepped back into he kitchen area, and leaned on the swinging gate, looking straight at me.  After some time, Mr. Too-Tired-Teacher said some things that I didn’t understand…but he expected me to…and Mitsui-san called him “hene ojiisan” (crazy grandpa)…and everyone burst into laughter…even Mr. TTT.  They have tended to be somewhat straight-laced with me, and this was refreshing as they let go of some reservations.  Mr. T3 left, and they all suggested that I take my usual seat…Mitsui-san even moving my notebook and pen for me as I spun my tray around to my proper place.  Another man pulled up in his car, and they began chattering about who it was.  They motioned to me and then to the window and said, “hene ojiisan”.  I thought it was the same man returning, but it was a new man.  When he had sat down and was waiting for his coffee, he asked me if I knew about Dixieland…and I regretfully replied in the affirmative.  Then, Mitsui-san said that this was hene ojiisan 2!  heh.  Everyone laughed again, and we went on with our food and chatter and then I left for the post office.

To note, the post office workers were also in their own good humor.  “Itsukurisama” means something like…”ok, I’m leaving now”…or something along those lines…I’ve been told the meaning several times but still haven’t captured it.  Taka and Samantha had been there before I had gone, and when the manager has seen her name, he said, with a big grin, “Itsukurisamansa“.  He chuckled, as did Taka…but when he looked at the ladies working there as well…they had a look of “Oh, not that joke again?!”  Heh.  I guess it’s kind of an older style of joke…the name Samantha is popular from Samantha on Bewitched!.  Just goes to show you…there are groaners in every language.  And I leave you for the day.  Have a great one!