I went downstairs to watch/listen to the sermon by Francis and Lisa Chan from July 27th, and then my own pastor’s sermon from last week (but I found out it was Randy Baird and not PT…to my joy.  It is good to hear the voice of a friend even if they’re not talking to you directly.)  Now, don’t be frightened when I say that Francis AND Lisa were preaching, because it was more of a seminar kind of thing on Christ-Centered Relationships…the first of an un-numbered series.  I am so glad of it too, because I’ve been thinking a lot about singleness and everything.  I have come to the conclusion (at least right now) that I am doing best being single.  But, I’m getting ahead of myself.  First, let me introduce you to a friend. 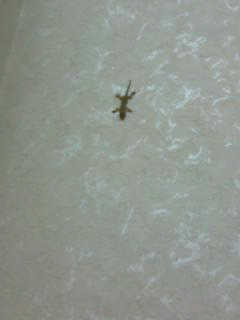 This is Frederick.  He decided to sit and listen to the sermons as well, and though I tried to remove him from the premises…he just would not cooperate.  Maybe he has been struggling with singleness as well.  Just joking!  I know lizards don’t have spirits!  I was able to finally coerce him into my “Pocky Men’s Chocolate” packaging and deliver him to the outside world where there are many wonders and insects for him to gobble.  I don’t know if it’s common to get lizards in the buildings this time of year, but I enjoy the little guys and I’m hoping to see him again sometime.  Introduction over, back to my blog.

Have you read these verses?

Ok…I’m pretty sure I’ve read these before, because I conveniently have the last sentence of verse 31 highlighted with orange colored pencil.  But, I don’t remember an ounce of it.

Shoot down to verse 35:  I say this for your own benefit, not to lay any restraint upon you, but to promote good order and to secure your undivided devotion to the Lord.

I don’t think that Paul is saying that it’s not good to have a wife (or husband), or to mourn, or to rejoice (definitely not rejoice because in Philippians 4:4 he calls everyone to rejoice and then to rejoice again…which literally translates to 4x the joy), or to have goods, or to deal with the world.  BUT, he wants us to know that TIME IS SHORT!  It’s short!  The word “short” means that the time has only been contracted out…like work on a new building in town.  There is a bigger picture than our relationships, our griefs, our joys, our possessions, and our events.  It’s God…that’s all there is to it.  It’s God.  And we need to be careful that we do not give too much emphasis on those “other things” that it takes our focus away from what we are supposed to do – tell about GOD!

A couple weeks ago, Greg Laurie of Harvest Ministries, received terrible news that his 33 yr old son, Christopher, died in a car accident.  He was on his way to help set up and organize for a huge conference Harvest was having in Anaheim.  Chris was married with a kid and a baby on the way.  Two weeks later…just this past weekend, Greg preached at the conference on life, death, and passion.  Over 1,000 people received Christ out of the 11,000 in attendence.  That’s wonderful!  What a witness!  “and those who mourn as though they were not mourning.”  Of course Greg and his family are mourning their loss…but Greg knows enough about God to know that he has to keep going, that the work is bigger, and that Chris is not lost to them.  He is in heaven right now and God is so pleased that he took Chris while he was serving God.  What a way to go!

“Those who have wives live as though they had none.”  I’m not married, and frankly, right now I am glad of it.  I think that I am too independent and selfish for my own good.  Right now, I feel content with it being just me and God.  And I don’t think that’s a bad thing.  I think I am afraid that if I got married, I would try to depend on my husband more than God.  Francis and Lisa used an analogy of divers in a tank of water fighting over an air tank.  In any relationship, we should be getting our sole support from God, not depending on another person.  I agree that a happy relationship is not a list of 10 things in which “Having God first” is the #1 point.  I think the list should only be God.  Everything else will fall into place…if you are really loving God and seeking to give Him glory, it will all fall into place.

I don’t know if marriage is in my future.  I don’t care!  Right now, I can see that I am most effective in glorifying God by being single.  If He chooses to change that, so be it.  But I’m not going to put any pressure on myself just because the world thinks it’s weird for me to be 20-something and not in a serious relationship.  I AM in a serious relationship.  I am passionately in love with my Savior…the God who decided to forget all the terrible things I have done to Him…all the times I have disobeyed His commands…and chose to love me.  Love me so much that He sent His Son to earth so that mankind could do our best to destroy Him.  Wow, I love that God!

4 thoughts on “A Lizard and the Single Life”