Two days ago, me, Nakayama-san, Taka and Aki, Noriko, and Johnna went to hear the Shimonoseki Wind Ensemble perform a concert.  It was amazing!  I’m not a huge fan of bands…there’s something delicious about a full orchestra…but this was a really great concert and as the orchestra only performs once a year here…and I missed it already…this was a welcome diversion.  I love going to the symphony and theater back home…I really miss it.  There were so many great concerts planned this current year for the Cincinnati Symphony Orchestra, I was bummed to be out of the country.  But, God allowed me to meet members of the Shimo Wind Ensemble and through our new friendship, they gave me and my friends 8 FREE tickets to the concert.  We were only able to scrounge up 6 people to go, but it was a good group.  The concert started off with several marches, typical of a band.  The second stage was the “karumina bura-na” a classical piece that I have yet to figure out what it is.  The way katakana works sometimes distorts foreign words so much that I can’t tell what it is saying until someone just points it out to me.  I recognized the music though and it was beautiful.  The third stage had a complete change of uniform as all members went to casual clothes and they played through a medley from “Enchanted”, a medley of Eagles songs (Desperado, Hotel California, Take It Easy…etc.), a medley of big band swing dance songs, and for the encore – the theme from Ponyo, Ponyo…a recent Japanese anime movie for kids about some little fish kid in the ocean….the tune is really catchy.

Yesterday, Johnna and I hopped on the train around 12p and took it to Takibe (1 hour or so north of Shimonoseki).  When it stopped at Ayaragi, Eri joined us and we enjoyed a long train ride through the scenic countryside.  We had to switch at Kogushi and then a couple more stops and much sea-side view before we stopped in Takibe.  We were hungry for lunch, but we didn’t know how to get to the next destination.  We found out a bus would be by in about half an hour, so we ran off to find some food to grab and run.  No restaurants were in sight except for a cozy udon restaurant, but we didn’t have time to stop there.  So we went to a supermarket and got some obento and headed back to the train station.

We boarded the bus, which had only one other passenger besides us (an older woman who got off at the next stop), and we ate our obento.  The scenery was really nice, and the almost hour long ride was pretty enjoyable…our own private bus ride.  Meanwhile, we heard that it was raining pretty hard in Shimonoseki, but ahead of us was a beautiful blue sky.  Finally, we got to our destination…the gorgeous Tsunoshima!  The beach and water were wonderful! 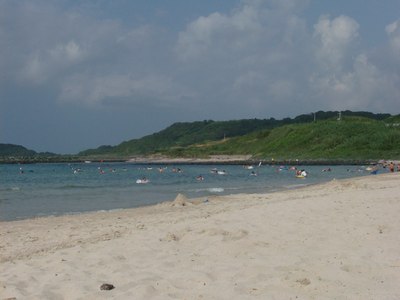 It was much too tempting.  Johnna was wearing a swim-suit, but Eri and I are poor and haven’t bought one.  But, without much resistance, Eri and I plunged on in and it was so much fun!  Took our clothes a long time to dry (I still wasn’t fully dry when I got home a little after 8pm.  It was really fun though, we had a great time.  When we thought we should head up to catch the bus back to the station, we got some kakigori (snowcones…mine was mango…yum!) and then scrambled to find the bus stop.  There were a few more people on the bus going back than when we rode out, but it was pretty nice.

We decided to grab some dinner in Takibe before catching the train, so we stopped off the bus a little early of the station and walked to the udon restaurant.  Alas…it was closed!  But we had seen a yakitori shop (yakitori is basically grilled meat on a stick) so we went back to have some dinner…relishing in the glory of fried potato (potato wedges).  We hopped on the train and took off for home.  Eri disembarked at Ayaragi and Johnna and I continued on to Shimonoseki.  The train was kind of crowded – there was an older couple who boarded at Ayaragi and the woman sat next to us and her husband sat across from her on the other side of the train.  At one point, she tried to get his attention, but he was dozing.  She looked at us, started laughing because we noticed it, pointed to him and said, “Ojisan” (grandpa).  Heh.  Then she proceeded to tell us that her child had studied in Wisconsin and had been there when 9/11 happened.  She asked where we were from and so we told her our states…she figured out where Maine was, but we didn’t get to explaining where Ohio was.  When the train stopped, the husband asked if we were going somewhere else, and I told him we were stopping here.  They were so sweet and even though they didn’t know any English really, and I know such little Japanese, they were still willing to have a convo with us.

Below is a link to more of our pictures from Tsunoshima.  Enjoy!