This review will be a little different than my others.  I had a week’s worth of time off still on my schedule.  Since my hire date was the first Monday of May last year, I had to use it up before that date or I would lose it.  I’m glad I took the whole week off.  It seems like Spring waited until this week to really get itself bloomed and green.

I enjoy doing things on my own.  Don’t get me wrong, I love having company on my adventures.  But there’s something a bit relaxing going around on your own.  You can decide everything that YOU want to do and not worry about what others want, or if someone’s tired or whatever.  So, I saw a Groupon for a B&B in New Albany, IN, and decided it would be fun to go on my own, during my little vacation.  In this entry, I’m going to go in order of the places I went to, so here we go!

I’ve only been to one other B&B and it was a pretty awesome experience.  The Admiral Bicknell had a high level of expectation to live up to, and it did pretty well.  I stayed over on a weeknight and was the only person there besides the hosts.  Valla Ann was great, but I didn’t see her much except when I first arrived and then in the morning for breakfast.  That was probably due to my taking off as soon as I got settled in and then keeping to my room most of the evening. (The room was fantastic, which will explain my reclusion.) 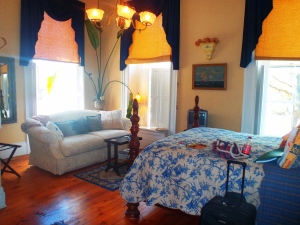 I stayed in the Library, which has been converted into a lovely suite. The accommodations were perfect for a single traveler; in fact, I think if someone else had been with me, it would have been cramped.  But there was a queen-sized bed and a bathroom with a clawfoot tub.  The windows face west and north-by-northwest, and it’s actually right along the busy Main St.  If you aren’t used to a good amount of street noises, then it’s probably not an ideal location for you, but I loved it.  Especially the clawfoot tub.

There is a shallow pool behind the Inn and a lot of green space around the whole lot.  Train tracks run directly behind the property along the Ohio River, but Valla Ann was recently able to get the Main St district labeled a Quiet Zone, one of only 11 such places in the state!  This means, even though the trains run through it, they are not permitted to blow their horns, which is lovely.

Carnegie Center for Art and History

This is one of my favorite kinds of places to visit in a new town. I love checking out local art and especially local history.  New Albany has an exceptional history with the Underground Railroad.  They have a permanent exhibit about the places and people who were strategic in rescuing runaway slaves.  They also accurately detail the full scope of the issue in their area.  I knew the Ohio River was one of the places which slaves aimed for when trying to escape, but I lumped all of that to the Cincinnati area.  Thankfully, there were many other locations on the River that were safe-zones and big stations on the Underground Railroad.  There were many in New Albany who were abolitionists because of their spiritual/moral convictions, which was refreshing.  Also, some people in powerful positions in the community were on board as well, such as judges, lawyers and real train conductors.

There is also a permanent exhibit of working motorized wooden dioramas – carved by one man, Merle Yenawine.  They cover life in a small town of Indiana from before and after 1900.  It was pretty cool how the tiny figures would move around and lights would flash underneath certain parts to make it look like a fire roaring.  The scenes were pretty comprehensive too. 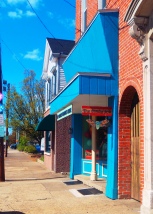 This little shop is absolutely adorable!  It’s the only other place that I knew about in New Albany before going down, and it was on my “MUST VISIT” list.  I’m glad I made it in!  It’s run by twin sisters, Ani and Ali, and a lot of their stuff is on consignment from artists who handmake their wares and sell on Etsy.  The items are quirky, cute, hipster, trendy…um, what other adjective could I throw in here…vintage, stylish, chic – basically, amazing stuff.  I bought some earrings for a friend, some hair clips and a journal that was converted from an old “In the Year…” book.  It’s one of those books that tells you all the things that happened in a particular year, but they spiral bound it and dispersed some of the pages among the blank journal pages.  I’m so excited about using it!  They are available on Facebook, as seen above, and the twins have their own Etsy, here!  They do a lot of sewing and creating themselves, so you should really check them out!

I will continue with Part 2 shortly!  Stay tuned!

Virgils feels too fancy to qualify as a burger joint.  Clean and crisp black linen tablecloths covered with butcher paper and overly polite waiters just don’t scream out “Burger time!”  But don’t let that fool you: the modestly named “beef hamburger” – grilled, succulent beef topped with sautéed mushrooms and caramalized onions on a multigrain kaiser roll – equals hamburger heaven.  And do not miss out on their sweet potato fries with a side of ancho-mayo.

Why not hit two birds with one stone?  Christmas Eve Eve, I got to hang out with my bff, the lady half of Bearded Lady Pics, AND check out another restaurant in the greater Cincinnati area.  We snagged my Burger Edition of Cincinnati Magazine and flipped through until we settled on Virgils.  Being on the Kentucky-side of the Ohio River, it was one that I was looking forward to visiting and meeting up with Lans was a perfect excuse.  We called the restaurant around 6:15 to make our reservation, arrived at 6:30 and were seated immediately.  I understand that it was a Thursday night and Christmas Eve Eve, so I’m not sure if that makes a difference in the speediness of their reservations/seatings. I was majorly pleased.  FYI: Parking is on the street, but it’s in historic Bellevue which is just about the cutest place on earth. 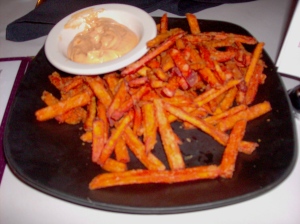 I cannot vouch for the hamburger that is mentioned above, but I will say that the descriptions match the dishes we ordered to a T.  Our starter was, in fact, the sweet potato fries with ancho chile mayonnaise.  I was never a fan of sweet potato until living in Japan (they have a way with potato and squashes) and I have only seen sweet potato fries in the last two years.  I LOVE them and these were no disappointment.  I do not usually eat mayo, but the ancho was irresistible.

As CM’s review says, the restaurant does feel fancy but it’s still comfortable and intimate.  The lights are dimmed and there are so many nooks and crannies that you feel you can be off by yourself.  We were seated to the right of the entrance, on a platform featuring the bar and the entrance to the kitchen – where the magic takes place.  There was a lot of activity around us, being so close to the kitchen, but we didn’t mind it at all.  I’m sure that the other end of the restaurant is more subdued, but we enjoyed being close to the action.  Our waiter was Ben, who I found out later (through Twitter) was tending the bar for the first time that night.  He did a great job of keeping tabs on us and the one other table as well as holding his post behind the counter.  His back-up/co-waiter was Darius and between the two of them, our glasses were kept full of drink, our plates full of food and our mouths with laughter. (This isn’t a hard thing for me and Lans, but it helps to have really fun waiters) The other thing I’d like to note is that there is a whole hip-vibe in the place, but it’s not so trendy as to exclude a princess coloring book on the counter next to our table.  We enjoyed that touch.

Our meals were the Fresh Pasta – with seasonal veggies, beurre blanc, and chicken and the Étouffée – chicken, homemade andouille sausage, dirty rice and garlic bread.

I know my étouffée looks awful, just blame it on my you-, I mean, camera.

This was my first time eating étouffée and I loved it. The sauce was a mix of sweet and spicy and the sausage had a lot of kick to it.  Rice is always a winner for me and the chicken broke apart when I began to cut into it.  The only negative I have about this dish was the overly-crunchy garlic bread.  I managed two bites into the center of it and then had to discard the rest, but I’m chalking this to personal preference. 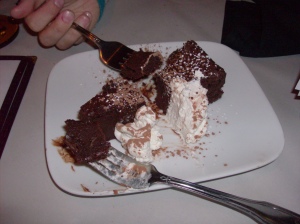 There is no dessert menu and the options are sort of limited…but if you hear your server say the three most beautiful words – Chocolate Bourbon Torte – place your order right away.  Lans and I shared a slice of it and, though I missed the proper “before” shot, I’m sure this one gives you an idea of the deliciousness.

It was like a rich waterfall of burning ice and decadence cascading down your throat. (how’s that for descriptive?)

This is definitely on my list of top fave restaurants now.  I think what I like the most about it is what I learned after eating there.  On their website the owner, Matt Buschle, talks about how they seek out locally-grown ingredients and work to build relationships with local farmers.  Most of their furniture, equipment and a plethora of other items are reclaimed from other places and forgotten warehouses.

The food: excellent
The help: awesome (in the words of our waiter)
The parking: on the street, but there’s a ton that you can find.  It’s a really nice area.
The accommodations:  I’m not sure I would go there with a group of more than 6.  It’s intimate and cozy.
The price: Between the two of us, the meal was close to $50 (sans tip).  That was with one starter, one dessert, and two entrées, oh, and one Coke.
Returnability: For special occasions – 100%. For casual “I’m hungry tonight” dining – maybe 35%.