When I tell people that I like to use Groupons, the reactions run in a few directions.  Many people haven’t even heard of Groupons and think it’s a cool idea.  If the person is a regular Groupon user, the reaction is usually enthusiastic.  For businees owners, though, I think the reaction is becoming very mixed.  The heat comes when the users become just that, Users.  They abuse the system for their own personal gain.  I think the original intent was to provide a way for local and smaller businesses to get the word out about what they have to offer to a large group of people in order to have a new stream of loyal customers.  However, it’s a catch-22.  Many who now use Groupon are the modern-day coupon chasers, missing only the curlers, horn-rimmed glasses and bright red lipstick smashed beyond the lips.  Ok, ok, that’s a harsh image.  But in reality, businesses are re-thinking the use of Groupons to drive in new business.  It becomes a “hit and run” for the customers and then they’re gone, on to the next deal.

This ugly picture is just to clarify that it is not what I do, nor what I think my friends do.  We don’t sit around and wait for a Groupon to come available from our already-favorite restaurant and then stock up on the deal.  I love to find a new place on Groupon in my area (and sometimes beyond it) so that I can explore and try out a new thing – with the hope that I can add the new place to my favorite places list.

My friend  recently bought a Groupon for a local Mediterranean restaurant called, Taz.  Ever since I went to Cairo, I’ve been wanting some good Med- cuisine.  So, she invited me to head over to Taz.  It has a pretty good reputation for having wonderful Med- food.  Several friends said that we would not be disappointed and, in regards to the food, we weren’t.  I don’t like writing reviews that may be bad, but there are some things you should know. 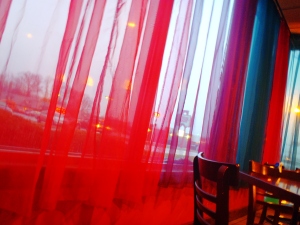 When we walked in, there was a “Now Hiring” sign on the door.  I’m hoping this explains the slow service.  If I’m remembering correctly, there was something blocking our way into the building – like a bucket and mop.  We had to step over it, or go out of our way to step around it.  It was awkward.  The exterior (which I don’t usually judge) gave no indication of “good food” being inside, but I don’t want to hold that against them.

We were seated pretty quickly, given menus and brought our waters fairly quick.  But that was where the speed stopped.  There were only two other groups of 4 in the restaurant when we sat down.  A couple more came in by the time we received our food.  We didn’t know if we were supposed to wait for her to come back, or if we went up to the counter to order our food.  The waitress (the only waitress) was nowhere to be found, so I asked a guy who was standing in line what we were supposed to do.  He said that she would come to us.  At this point (maybe 15-20 minutes after sitting down with menus), we were talking about how the food would probably be amazing and stay our growing hunger. 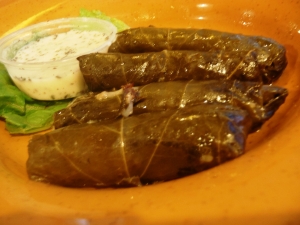 By the time she did get over to us to place our order, she was not very courteous – but, again, I’m hoping it was because they had just lost another employee and she was doing her best.  We waited for a long time again.  We ordered appetizers of yalanjie (stuffed grape leaves) and falafel.  They were delicious and we thoroughly enjoyed them.  It took a long time for them to come to us and they were quickly followed by our main dishes.

I’m sorry that I can’t remember what my friend ordered, but she loved it.  I ordered a Kofta Kabab Sandwich.  I didn’t realize how much would be pickled though, so on my part, I was able to enjoy as much of my food as I could have (I’m allergic to vinegar).  But, it did taste really good and we were really glad of that.  However, with the wait, and the cost, it wasn’t worth much more than the Groupon, in our opinions.  We will continue our search for a favorite Med- restaurant.  There are a few in the area that we’re excited to try out too (Sultans, Aladdins).

So, here’s the breakdown:

The food: Very good.  Not as good as some other Med-cuisine I’ve had, but still, I can see why it has the reputation it has.
The help: Our waitress was the only one in the restaurant.  I believe I saw someone in the kitchen, but really, there was no other visible life besides the other customers.  The “Now Hiring” sign suggests that they are aware they are understaffed and are working towards fixing that, but still, be prepared to wait.
The parking: They have their own parking lot.
The accommodations:  The interior was really lovely.  They had one sections, which we weren’t seated in, with couches and curtained off sections.  I think i read that they also have sheesha pipes available, but I didn’t see any out.
The price: Kind of pricy.  The Groupon really helped.
Returnability: Probably not.  If I have a group of friends who really want to go there, then I’ll probably go again, but there are other restaurants that have a little better reputation and image than this one.  I’d give it a 35%.