Well, we decided to go see Star Trek last Saturday for my birthday. Rather, I decided and Matt said, “Sure…it’s your birthday!” But he laughed during all the appropriate parts…sometimes during inappropriate parts too. Like, when one character is dying, and there is intense grieving on-screen, he turned to me and said, “Spock says, ‘Whaaaa??'” I did tell him that Vulcan’s don’t have much emotional expression, but I neglected to tell him how Spock is part human and therefore, capable of expressing emotions. Moot point. I shrugged it off and went back to my tears.

We stopped at Red Robin for dinner. My first time. *First times!* I got the Chili Chili Cheeseburger. Can you say yum?

All that was left. It was so tempting that I forgot to take a before photo.

We got a box of gift cards to restaurants and such at one of the wedding showers, so my birthday date night only cost us about $10 max and that was leftover cost of meal and tip. Very nice afternoon/evening.

I’ve been trying to make this place more homey and together. It’s been hard because there are still boxes about that need to be unpacked. I can’t do that until I paint the bookshelves and start getting things on the walls. It’s a mess.

But I did manage to pull out the tablecloth and napkins and iron them out. I’m just saying, tablecloths are my least favorite thing to iron.

Sure looks pretty, but I’m still not sold that it was worth the effort. Not to mention, it’s a round tablecloth! Ugh. Anyway, those are the flowers from the Huz. We’ve actually had two meals at the table now, since I put it together. That’s nice.

I’ve even been cooking. I had bought some various kinds of meat and thrown them in the freezer until we got around to doing something with them. I’ve been eyeing the tilapia that’s been in there for a while now, but I’ve never made fish before…besides fish sticks as a kid, and I have long since thrown those out of my diet. So, I went to good old Allrecipes.com and searched, “Easy tilapia.” No joke.

Here’s what I got:

and here’s what my version of it looked like:

Ok, the fish IS in there, and it tasted yummy. I forego most things with lemon, and I went ahead and increased the amount of melted butter. It was pretty wonderful. There was so much seasoning on the fish, that I didn’t put much more than salt and pepper in the mashed potatoes…which I made from scratch. Go me! 🙂 You have no idea what an accomplishment this is for someone like me. I have never felt comfortable in a kitchen unless I was baking something, and then I’m right at home. Cooking is too ambiguous for me; there just aren’t enough rules. But I think I’ll keep trying at it. Matt certainly hopes that I will.

Speaking of kitchen, I walked into mine last night and found some tiny black ants crawling on one of the counters. Just in one little spot. You could tell they were just starting to explore. Ugh. I pulled everything off that section – they weren’t in anything yet, so it was a good catch. I stopped by Home Depot after work today and picked up some bait things and some spray. 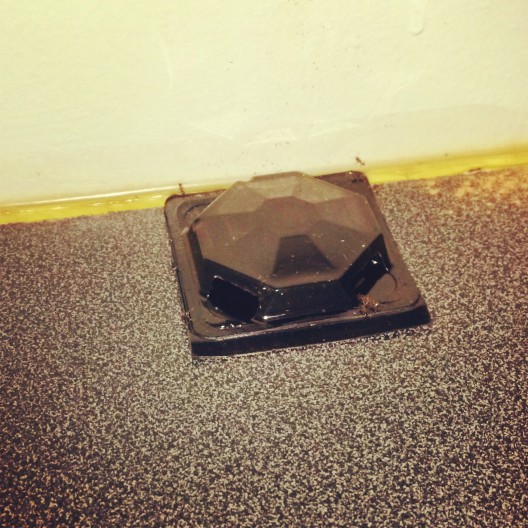 They caught on pretty quick. I went down for a nap and when I woke up 30 mins later, they were all over the trap. And then taking it home to their queen….to MURDER her! muahahaa! I let them go back and forth between the bait and their lair for a few hours and then sprayed the perimeter. The stuff must be pretty potent because there is little to no movement in that corridor now. Maybe I’ll leave the carcasses for Huz to clean up. 🙂 That sounds great!

I mentioned that I have some bookshelves to paint before I can really start putting the house together. Well, here’s one! 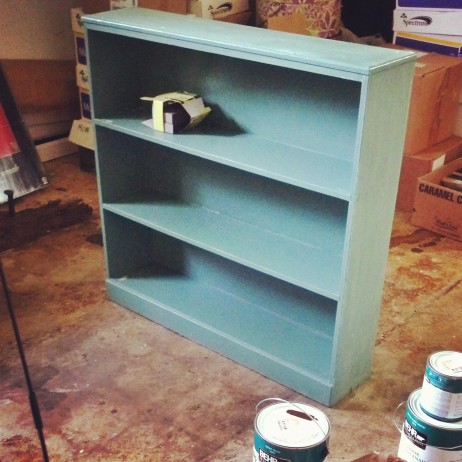 This used to be my dad’s…way back in his college days. I didn’t know that until a week or so ago. This isn’t its finished state. I am just getting started. But i think it’s going to be good. It’s a short one and then I have its two big brothers to paint after it. Wish me luck! I love painting. 🙂

Not much to report, except that I was weeding the other day and came across these!

Yipes! Those things were huge! I don’t know what I’m going to do with this garden bed. There’s no telling what will come out of it. Ugh. Good news, though, my Impatiens are doing beautifully and starting to really fill in! Yay! Off to finish painting!